Netflix’s Stranger Things is the latest in a growing list of phenomenal successes for the streaming service. The show’s mixture of horror, mystery and nostalgia seems to be striking just the right chord with worldwide audiences.

The series is a really entertaining chunk of modern television. There’s a lot to admire with this production, especially the look-and-feel, and it’s super easy to get caught up in the ride. But there’s something that bugs me when watching Stranger Things, something that niggles constantly like the faint mutterings of a missing boy (yup). Something that, sadly, means my enjoyment is left incomplete.

As a fan of TV, of movies, and, perhaps most importantly, a BIG fan of the novels of Stephen King, I felt the way many people will have as soon as that evocative title card popped up on screen, with its warm and menacing synth accompaniment and blood-red typeface ripped straight from King’s early covers — that this series was made just for me.

And the nostalgia kept coming. The plot, put simply, sticks together genre classics E.T. and Poltergeist, and uses King’s stories as the glue. There’s stuff here from so many King books and novellas, from Firestarter and Carrie, to The Body, The Mist and It. And sure, I got some enjoyment out of spotting these references as they cropped-up. I guess that’s partly the point. 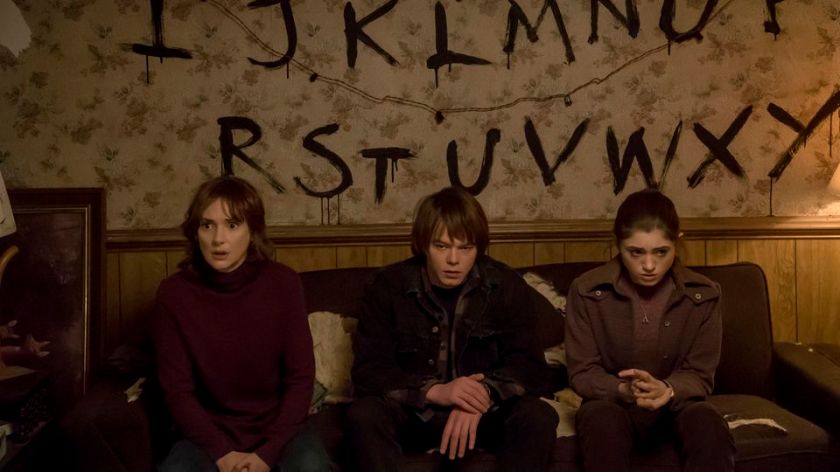 The inevitable sheer disbelief at being told you’ve got an ‘R’ growing out of your head.

The problem is that Stranger Things’ narrative isn’t so much influenced by these sources as much as pieced together using them. It’s like a lumbering Frankenstein’s monster that kinda looks like a complete human, but there’s something a little…off. The plot in Stranger Things looks like a complete plot, but study it closely enough, and you can definitely see the joins. And there are precious few original parts.

I’m aware that I’m perhaps in the minority in that I’ve seen or read the bulk of this this show’s influences. But some of the key narrative elements are lifted from stuff that is so incredibly well known (especially in the case of E.T., one of the most beloved children’s films ever made, and Poltergeist, one of the most influential horror movies) that these elements stare you right in the face, almost daring you to call them out.

So the strangest thing about Stranger Things is that Stranger Things barely exists as a thing (if you follow). It is, to my mind, such a product of its influences that it is difficult to figure out the show’s true identity. Take away all these contributing influences, and what’s left? Well, as it turns out, a really charming show.

Because although this all sounds pretty damning, there are still some huge positives to a show that, as I’ve already mentioned, I really enjoyed. The soundtrack, as I’ve already touched upon, is fantastic at not only at capturing the era, but also helping to give the series its own distinct feel when perhaps the events onscreen sometimes do not. That’s not to slam the cinematography, far from it. This show looks fabulous for every second of its runtime, that lived-in, period feel evoked perfectly, helped in no small part by the set-design. It all comes together to create a really believable and cohesive universe.

Never could get my parents to buy me one of those cool plain red, white and blue caps.

The kids are, to risk stating the obvious at this point, uniformly excellent, in a way that unburdened child actors can be from time to time, but also the rest of the cast pretty much nail it too. Wynona Rider is of course great, and I found David Harbour’s Sheriff Hopper, in particular, to be an uncommonly engaging, supremely likable character with a really huge, welcome dollop of genuine agency, especially towards the end, which helped me really root for him when things really got hairy. And I felt a couple of laggy sections of episodes during the middle of the season were more than made up for by a romp of a finale that culminated in a proper conclusion, whilst still leaving enough open for the return.

And I’m excited for that return. If the filmmakers keep up the high standard set by season 1, but also take a slightly less well-trodden path with the narrative now that the world has been established, I’ll be the first one to put this up there with the best TV of recent times.

This is a text widget, which allows you to add text or HTML to your sidebar. You can use them to display text, links, images, HTML, or a combination of these. Edit them in the Widget section of the Customizer.
%d bloggers like this: